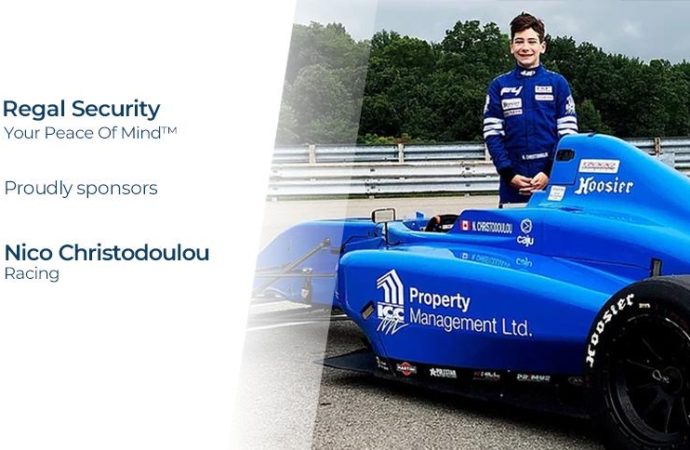 A well-known and esteemed security guard firm here in Toronto has just announced its formal sponsorship for a local teen who is now a motorsports hero in Mexico and beyond.

Regal Security Inc., a firm with scores of clients in Toronto and across the GTA and Ontario, will sponsor Nicholas Christodoulou for 2019-2020 in Car #22. ICC Property Management Ltd. in Toronto is also a title sponsor for this rising-star race car driver.

Nico, as he is known in the motorsports world, just celebrated his first Formula 4 win at the NACAM Formula 4 Championship in Mexico City in late October. His performance on the track was fueled with pure speed and magnificent precision, and the sold out crowd of 345,000 at the Autódromo Hermanos Rodríguez – home to the Mexican Grand Prix – rose to their feet and cheered as he zoomed over the finish line. The roar from the stadium was heard for miles… and miles.

Nico, who hails from Toronto, is the youngest F4 driver. According to media, fans, and motorsport coaches and critics alike, the 14 year-old is set to be a popular Formula 1 competitor in the very near future.

Nico is now a celebrity in Mexico, Brazil, the United States, and Canada, and will soon race in the next round of NACAM F4 races in Aguascalientes, Mexico – December 14-15. He is now training in Houston, Texas, and is all set for another big win on the track next month in front of thousands of fans.

With a passion for competing on international racetracks, this young teen has just been crowned by Mexican fans with a new nickname too – ‘Nacho.’

“Regal Security Inc. is thrilled to sponsor Nico in Car #22, and we know ‘Nacho’ will pull-off another stellar performance on the track in December, just like he always does,” says Nick Vetere, who is the founder and CEO of Regal.

“Our local superstar teen is sure making a name for himself on the international stage. He is a winner with a bright Formula 1 future, and is really fast and strategic on the track, and his popularity is soaring in Mexico simple because he is genuine, unique, and so enthusiastic and approachable out of the car. Fans really like cheering for the ‘good-guy’ and so does Regal Security!”

Nico is truly elated and humbled with Regal Security’s sponsorship announcement for this year and beyond.

“I will definitely make Regal Security Inc. very proud,” says Nico. “Their support is truly amazing and words simply cannot express how grateful I am for their sponsorship announcement. It means the world to me and I am proud we are on the same team – and we will enjoy each win together… one race at a time.”

“Partnering with me gives you a unique opportunity to put your brand front and centre,” adds Nico. “I am the youngest Formula 4 driver in North America, and possibly even globally. At a time when other kids my age are still competing in karting, I am working hard and have shown to be on par with the best Formula 4 drivers on the competitive scene, all of whom are considerably older than me. By switching my focus to open-wheel racing at such a young age, I stand out amongst the crowd. This will help me to attract future team opportunities as much as it will with new partners. It also ensures that I am press-worthy, which is an opportunity that I will happily share with my partners during interviews, or via the increased traffic that it brings to my on-line presence and your brand.”