Lorraine Simpson: Why Setouchi is celebrated as “The Aegean Sea of the East” 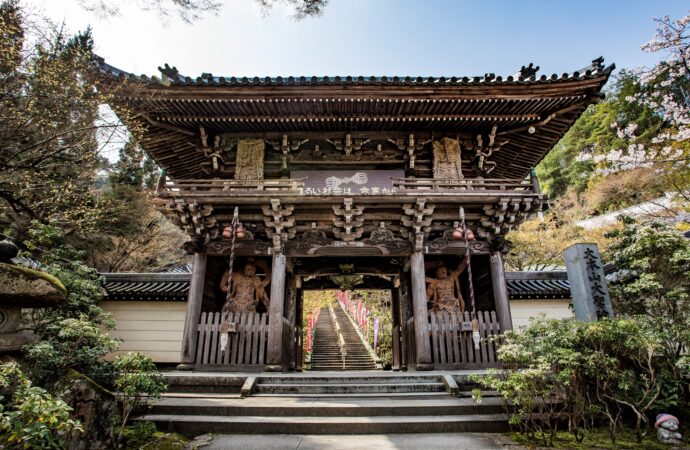 The food of a region is often high on my list of reasons to travel there and one place I have been craving to visit for just this reason is Japan.

Now in post-COVID-19 times, we are searching for the more off-the-beaten-path places and destinations that draw fewer tourists, so that we can follow social distancing protocols in the new norm.

Comprised of seven prefectures and 350 islands that flank the Seto Inland Sea, Setouchi is celebrated as “The Aegean Sea of the East.” This locale is the perfect mix of culture, food, and jaw-dropping landscapes. While most recognized for Hiroshima and its Peace Memorial Museum, there are many hidden gems to explore.

Landscape design enthusiasts will fall in love with the island-nation’s manicured gardens. Ritsurin Garden and Korakuen, one of the Three Great Gardens of Japan, are two of the most beautiful in the Setouchi region.

According to UNESCO (United Nations Educational, Scientific and Cultural Organization), it is a masterpiece of construction in wood, combining function with aesthetic appeal, both in its elegant appearance, unified by the white plastered earthen walls and in the subtlety of the relationships between the building masses and the multiple roof layers. 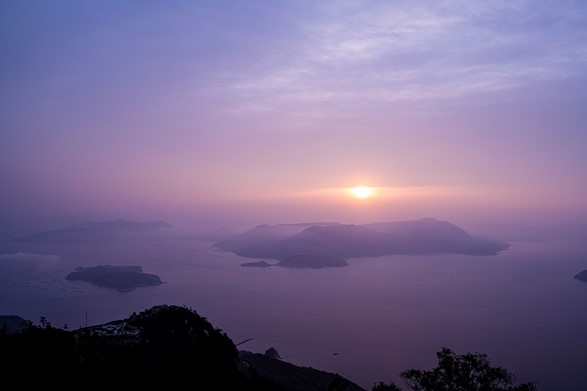 When travelling, you will want to make sure to enjoy the regional cuisine along with the sights! If you are in the nature-rich-Setouchi area, be sure to savor its unique local flavors.

The culinary scene in Japan is legendary, and this region is no exception. While you are in Setouchi, you must try the Olive Wagyu. Considered the rarest steak in the world – no pun intended as only about 2,200 of these cattle are raised on the island of Shodoshima – the beautiful marbling is the result of a diet that includes olive pulp. This originated by a cattle farmer in the region who believed that nothing should be wasted and who wanted to find a way to repurpose olive lees, a byproduct of olive oil production, and came up with a way to toast and dry the pulp, drawing out its sweetness and making it more palatable for cows. The result: a high-quality steak with a bold umami flavour.

Another famous dish of the region is Udon Noodles. In 806, the monk Kukai brought back from China to his hometown, the Sanuki province, the recipe of Udon. Fast forward to today and this is why the Kagawa region is now called the “UDON-PREFECTURE.” Slurp them up at any number of restaurants (there is over 600), or you can even take a class and learn how to make your own.

Because of the topology, the Sanuki mountains standing on the south side of Kagawa prefecture block the rain clouds coming from the Pacific Ocean.  This natural barrier against the rain creates the driest environment of Shikoku right here in Kagawa.

“Kawara Soba” is a local dish that has long been popular among the locals of Shimonoseki in Yamaguchi Prefecture. 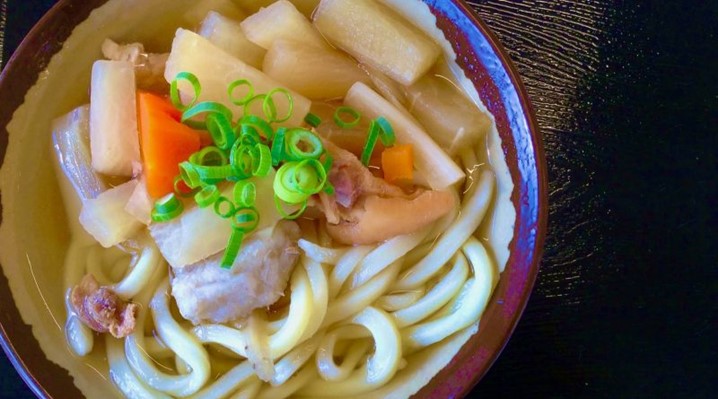 This soba (buckwheat noodles) dish is served on a heated roof tile and comes with a dipping sauce.

It is really exciting to see your sizzling dish being brought to your table! The noodles are green chasoba (tea soba) made with matcha (powdered green tea), which are grilled on the jet-black steaming hot tile until they are crispy.

Okonomiyaki is famous as Hiroshima’s regional gourmet dish. A flour and dashi-soup batter grilled in rounds, and layered with meat, vegetables, eggs, and Chinese noodles, then eaten with a rich, salty-sweet sauce.

There are a staggering 2,000-plus okonomiyaki restaurants in the prefecture. In addition to the basic “niku-tama-soba” (meat, egg, noodle), each restaurant offers a variety of standards and original versions.

Another dish to remember is the Miyajima specialty, anagomeshi (salt-water eel bowl). It is a regional dish made by grilling anago salt-water eel in a salty-sweet sauce and serving it on top of rice cooked with stock made from anago bones. Onomichi ramen, which is characterized by a rich soy-sauce based soup with fatty pork back on top and flat noodles, and fat, and deeply sweet Hiroshima oysters are also must-eats. 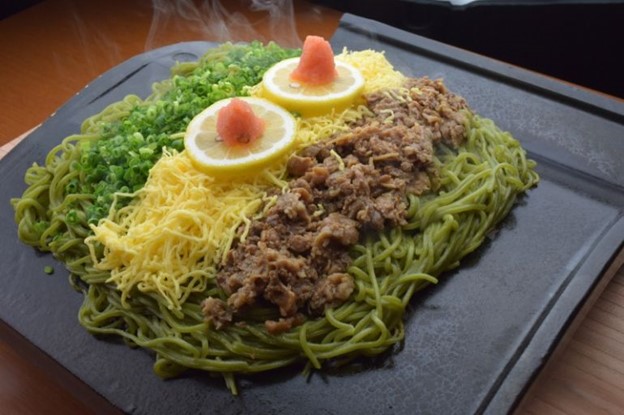 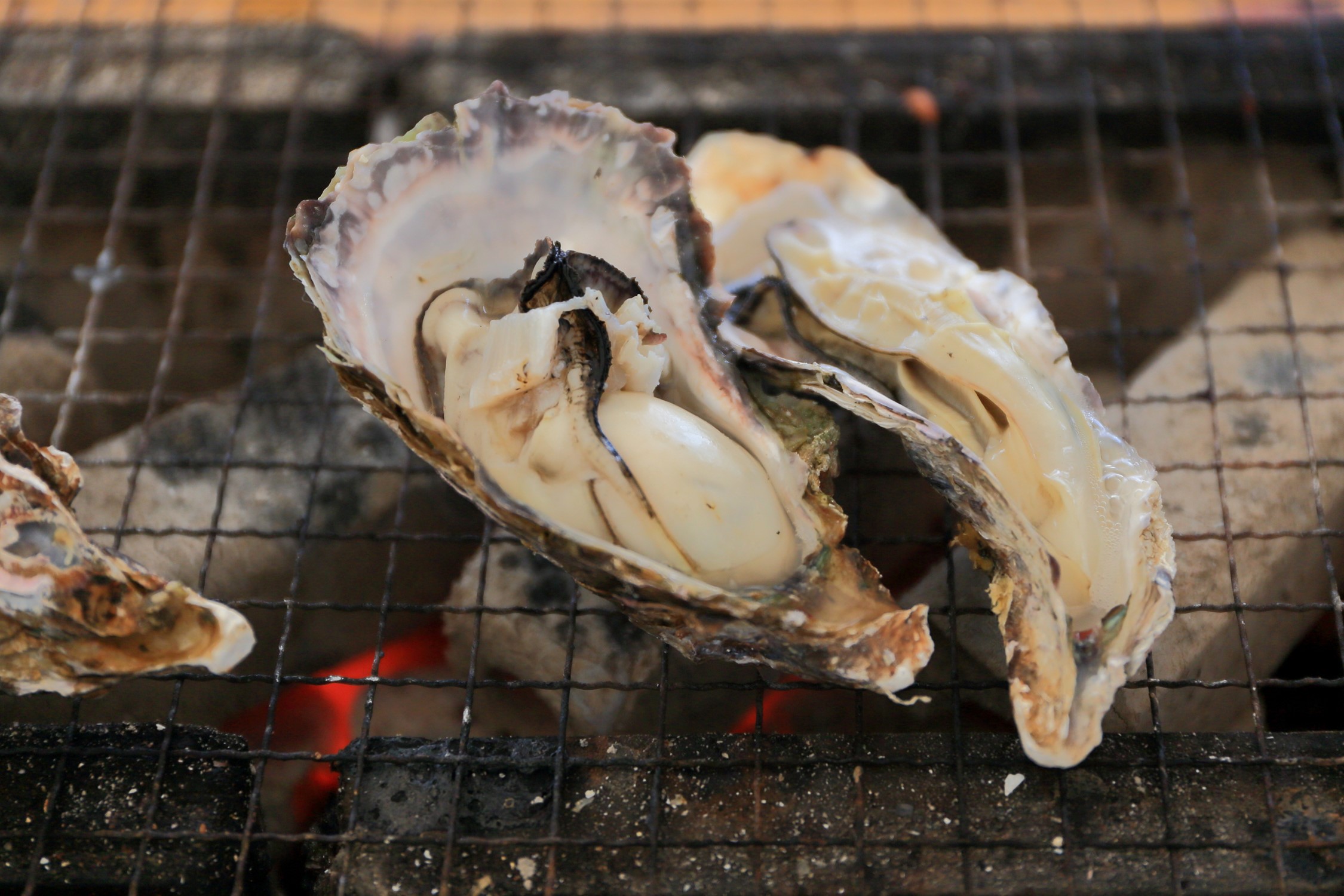 Another must-see is Miyajima, which has many World Heritage Sites. It is an extremely famous island that is regarded as one of the three most scenic spots in Japan.

Itsukushima Shrine, the World Heritage Site with a 1,400-year history, is the symbol of this Island. It is actually built in the sea, so that the vermilion shrines connected by corridors and the great torii gate, which is an important cultural property, appear to float in the water at high tide. This wondrous site is definitely worth seeing!

There is a lot more to visit, such as the numerous temples and shrines, mountains, and virgin forests, and there are also many gourmet food items to try, like “anagomeshi,” made by laying conger eel on white rice, and various dishes made with oysters.

Itsukushima Shrine was built more than 1,400 years ago. Because of its long history, not to mention its many national treasures and cultural assets, it is known as an old shrine that represents Japan both in name and in reality. Itsukushima Shrine’s 16 meter-tall torii gate and large, vermilion shrine building sit atop the sea’s surface, a rare location, adding to their splendidly graceful appearance. The shrine was registered as a World Heritage site in 1996 as a masterpiece expressing human creative talent.

The Atomic Bomb Dome is the ruins of the Hiroshima Prefectural Industrial Promotion Hall, which was almost completely destroyed when an atomic bomb was dropped and exploded violently during World War II, leaving just the framework and outer wall. As a UNESCO World Heritage site created with the wish that such a tragedy will “never again” happen, it is one of the bombed buildings that serves as a reminder of the terrible disaster. A park was created in the surrounding area, as well as the Hiroshima Peace Memorial Museum.

Spending the night in a neatly arranged room, eating cuisine made using local ingredients, soothing your fatigued body in a hot spring. Traditional style Japanese ryokan greet guests with heart-felt hospitality. Why not try spending some time in a refined place full of Japanese ambiance?

Among the un-spoilt Japanese landscape, lodging perfect for spending unrivaled luxurious time is in the Seto Inland Sea area. By staying in this lodging, you can experience the traditional lifestyle of Japanese villages, including old houses in villages among the mountains and buildings with thatched roofs.

With art hotels, which are packed full of a different kind of charm from a normal hotel, the building itself is a work of art and there are paintings and objets d’art everywhere. The Seto Inland Sea area is dotted with art hotels, including one built by architect Tadao Ando.

If you would like more information on this beautiful trending area of Japan please let us know and we can put you in touch with experts who are able to perfectly create a beautiful itinerary for you.