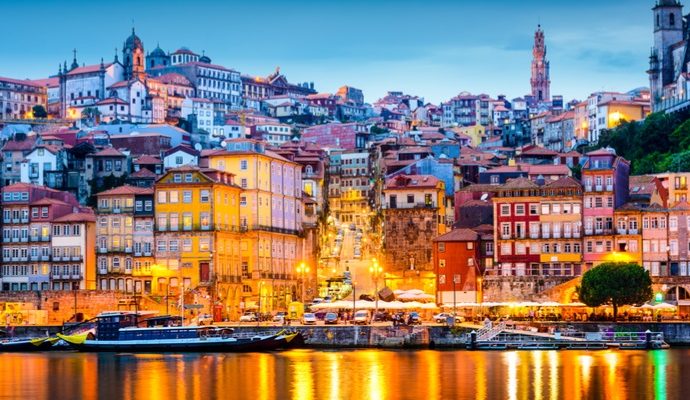 You will feel right at home in Portugal and will love its scenery, history, culture, and even better – you don’t have to worry about breaking the bank for a trip to this amazing country, according to Lorraine Simpson, the Cityline TV Travel Expert and Travel Guru.

This year Portugal was the runaway winner at the World Travel Awards with no less than 17 awards, including World’s Best Destination and World’s Leading Golf Destination.

“This comes as no surprise to me as I absolutely love this country,” explains Simpson, who traveled to Portugal earlier this year.

There are many reasons why everyone should visit Portugal, and here are Simpson’s top five!

You will love the food in Portugal

“As a foodie I love Portugal.  Feijoada of red or white beans, beef, pork, and sausages. It will make you come back for seconds (or thirds),” she smiles. “Try the delicious meat-lovers dish of Cozido, a Portuguesa with beef, pork, chicken, blood sausages and smoked pork parts. I love the Grilled Bacalhau (cod), sardines and octopus. Portuguese rice with onions and olive oil that will make you never want white rice ever again.  Queijo fresco, a creamy, soft, white cheese that pairs perfectly with traditional bread fresh from the Padaria. Wash it down with Vinho Verde (white wine usually from the Minho region), or a bottle of ice-cold Superbock or Sagres, and you’re good for a siesta.”

The wine is amazing in Portugal

You will be surprised by how inexpensive Vinho Verde is for its quality. They can be fresh, vibrant, and fruity.  Portugal is known all over the world for Port Wine, which is typically red and sweet and often served as a dessert wine. Legend has it that to protect the wine during the long sea voyage it was ‘fortified’ prior to shipment with the addition of a small amount of grape spirit, or brandy, which increased its strength, prevented it from spoiling, and gave it that sweet taste.

“One of my favorite wine regions and most picturesque places in the world is along the banks of the Douro River from Porto,” says Simpson. “If you prefer your wine to be robust and full-bodied, you might want to try a bottle from here made from grapes grown on steep, terraced vineyards that look so magnificent rising from the river.”

Portugal is home to lots of beautiful cities

Set picturesquely astride the River Douro downstream of the wine estates that made its name, Portugal’s second city comes alive in spring and is a perfect time to visit.

The history of Porto dates back to the 1st century BC when, under Roman rule, the city played an important role on the main trade route between Lisbon and Braga. At the time, the city was known as Cale, or Portus Cale (Port of Cale, the origins of the name Portugal), and was situated on the banks of the Douro River where today Porto and Vila Nova de Gaia are located. With its medieval heart, contemporary buzz, magnificent gold-leaf-laced-churches – oh, and a rather nice signature drink of the same name – Portugal’s second city merits a visit at any time, but has a special charm in April and May. After the rains of winter, there is lovely freshness and greenness to the city, and once again the cafés and restaurants that line the River Douro and the outlying beaches are coming back to life.

“Porto is a city compact enough to enjoy in 36 hours but as author JK Rowling discovered when she lived and taught here, there is something inspirational about it that tempts you back,” says Simpson. “In the south you will find the fairy tale city of Sintra.  This little city, located just outside of Lisbon, has so many castles that it is almost unreal. Every castle is built in another style — from a Moorish defense castle, to the classically Portuguese National Palace, to the surreal colourful Palácio da Pena, which looks like straight out of a Disney movie.  My favorite palace was Palácio de Monserrate, which was built as a 19th century version of an Arabian night’s dream.”

Portugal: The art and of course the tiles

“I can’t get enough of the Azulejos: ‘Azulejo’ is a word used in Spain and Portugal to designate a glazed tile, a terracotta tile covered with an opaque glazing. In these two countries, Azulejos have been frequently used since the 13th century to cover and decorate walls, fountains, pavements, ceilings, vaults, baths, and fireplaces. I especially love the old ones which are often beautifully crafted and painstakingly hand painted,” she says.

Shop ’til your drop in Portugal

Prices in Portugal are some of the most affordable in Europe and your dollar goes a very long way.

Pottery is one of the best buys, especially the pottery covered with brightly colored roosters from Barcelos are legendary. In fact, the rooster has become the virtual symbol of Portugal. Blue-and-white pottery is made in Coimbra and often in Alcobaça.

“My favourite items come from Caldas da Rainha,” she says. “They include yellow-and-green dishes in the shape of vegetables (especially cabbage), fruit, animals, and even leaves. Vila Real is known for its black pottery, and Aceiro is known for polychrome pottery. Some red-clay pots from the Alentejo region in the southeast are based on designs that go back to the Etruscans.”

Atlantis Crystal is another good buy. Suede and leather, as in Spain, are also good buys.

The best buy in Portugal is gold, which is strictly regulated by the government. Jewellers must put a minimum of 19.2 karats into the jewelry they sell. Filigree jewelry in gold and silver is popular in Lisbon and elsewhere in Portugal.

Traveling to Portugal has never been so inexpensive. Flights from as little as $800 and hotels from under $100 a night if you are on a tight budget.

To book a trip, get advice, or plan a business/group trip or destination wedding, contact Lorraine Simpson today and head to Portugal in style!