Hats off to another one of our very attentive Everyday Superheroes™, Nour Nataki 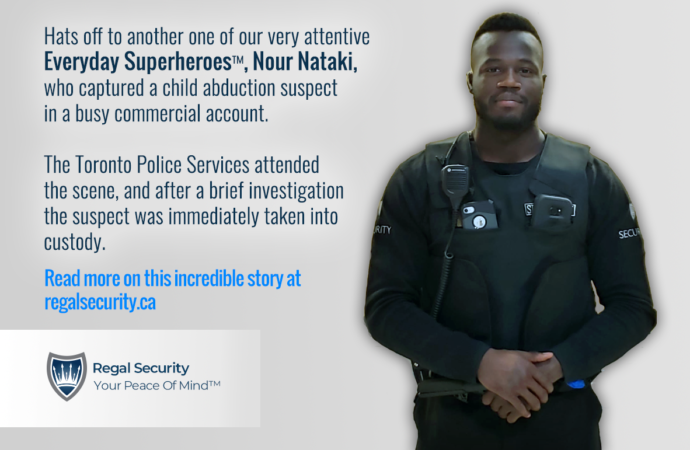 Our guard, Nour Nataki, was recently working at a busy downtown commercial account, when he was alerted to an incident occurring in the food court area. He sprang into action and encountered a frantic mother, who was clutching her child in her arms, and screaming and pointing to the escalators.

Nour, who works with Regal Security Inc. in Toronto, quickly managed to ascertain a person located on the escalator – a male subject, allegedly attempted to abduct her child in a nearby washroom area.

Nour engaged with the suspect after catching up to him on the down escalator, and at the same time a group of gentlemen were also in pursuit of the suspect.

The suspect was then apprehended by the two gentlemen, and as Nour arrived at the bottom of the escalator he then realized that the suspect was in danger from the others gathering around him. With this, Nour took charge of the situation and advised the suspect that he was to follow him, but when the suspect refused Nour engaged the suspect physically, taking control of the suspect and removing him out of harms way.

Shortly after that interaction, Toronto Police Services were contacted and immediately attended the scene. After a brief investigation, the suspect was taken into custody for allegedly attempting to abduct a child.