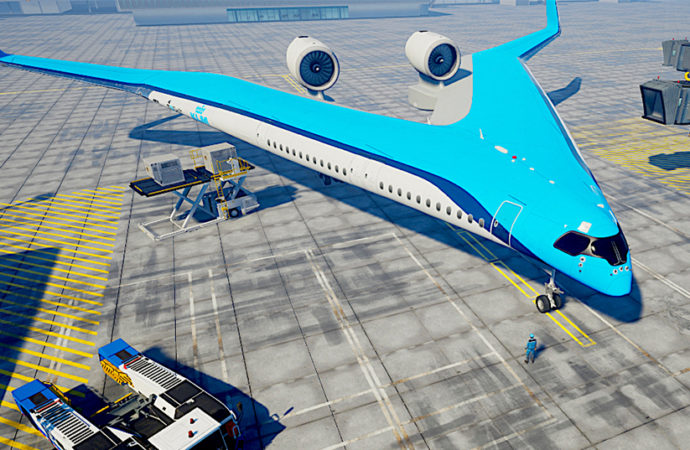 The most recognizable guitar around might just be the Gibson Flying V. Played by the likes of Eddie Van Halen and too many other guitar gods to count, it’s not a stretch to call it “iconic.”

Aircraft designers at Delft Technical University in the Netherlands and at Dutch airline KLM know a good design idea when they see it, and are now developing a new passenger jet inspired by that very instrument.

This striking design will seat 314 passengers in the wings and it has the potential to radically improve fuel efficiency—up to 20 percent. That would make the “Flying-V” plane considerably more fuel-efficient than the Boeing 787.

The key is in the wing design, obviously. Delft project leader Dr. Roelof Vos said in an interview that eliminating the old-fashioned fuselage shape as such should reduce the aircraft’s overall weight in addition to providing significant aerodynamic advantages.

Vos said the proposed design “realizes some synergy between the fuselage and the wing. The fuselage actively contributes to the lift of the airplane and creates less aerodynamic drag.”

The flying wing gives the appearance of a rather epic wingspan, but the team at Delft Technical have crafted a jet with a customary commercial wingspan, equivalent to that of the widely-used Airbus A350.

That is, the “Flying-V” won’t have problems knocking into other planes because it’s too wide.

How soon before we can take to the friendly skies in this sharp-looking flying machine?

While KLM may have a small prototype ready to display when the airline celebrates its centenary in October 2019, it is unlikely you will see a sky full of eerie-looking V-shaped planes before 2040.

Hopefully the KLM-funded “Flying-V” will be ready in time to ferry passengers to Finland’s 2040 version of the Air Guitar Championships.